Kakariki / Cyanoramphus auriceps
NOT THREATENED
Listen to this species call 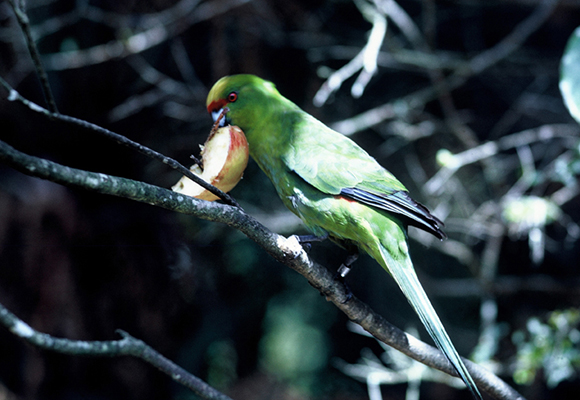 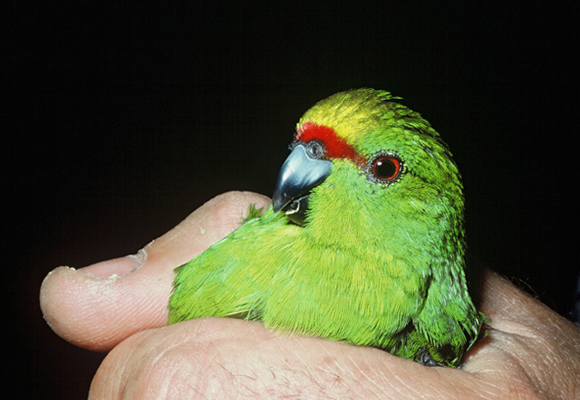 Yellow-crowned parakeets are listed as not threatened under the New Zealand Threat Classification System. Their common name is given to them for the flush of bright yellow on their crown which blooms up past their eyes; they are the smallest of the kakariki species.

Kākāriki are usually solitary or found in pairs, although in autumn and winter they form small flocks. They feed on berries, seeds, fruit and insects and may be seen foraging on the ground.

During the 1800s, kākāriki were common and at times flocks would emerge from forests to feed on grain and fruit crops. Farmers and orchardists considered them pests and shot thousands of the birds in an attempt to protect their harvests. Culling and destruction of their old-growth forest habitat were primary reasons for their near demise.

Today introduced predators (stoats and rats) are their main threats. Like other hole-nesters females and chicks are vulnerable when in the nest.

They are found locally in the Routeburn and the Dart Valleys.

Möhua are found only in beech forests with fertile soils where they can find plenty of food.

Kea, the well known, cheeky, high country, South Island parrot, is one of the world's most intelligent birds.

Kaka are large parrots that are mainly limited to a few forest strongholds in the central North and South Islands.

LEARN MORE
I recently hiked the Routeburn Track and was very impressed by the work you have taken on to protect birds
Kathy
UK
I recently visited the area around Glenorchy and walked the Routeburn to the second hut. I saw and heard some lovely birds. Keep up this crucial work.
Daniela
Germany
Fantastic work guys!
Sal
USA
Congratulations on your projects. The birds are beautiful
Luis
Spain
Kiaora. Just spent a few days in Glenorchy and read about you. Go birds!
Paula
NZ
$ 700